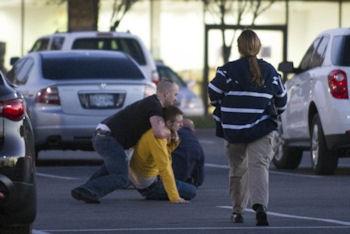 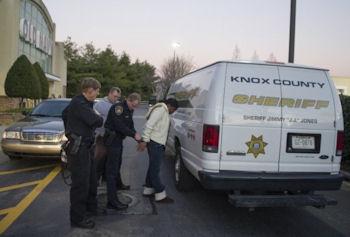 Thieves and other criminals who prey on shoppers and retailers have extra eyes watching them during the Thanksgiving through Christmas holiday shopping season in Knox County, Tennessee. Knox County Sheriff Jimmy "J.J." Jones kicked off a special program called "The Safe Holiday Task Force" in 2011 after a series of meetings with retailers on the problems they face during the holiday season. Members of the task force headed up by Captain George Edlund worked closely with retailers and prepared plans that benefited both retailers and their customers. The cooperative effort also included prosecutors and loss prevention specialists. The goal was to help combat shoplifting, theft, car burglaries, car thefts, and other criminal activities that occur in and around retail areas. Officers were in marked and unmarked vehicles, inside stores, in parking lots, in plains clothes and uniforms. The team members worked different shifts to accommodate the busiest shopping times and the most crowded shopping areas and stores. The Sheriff's Office also set up a special email system that allowed merchants and the KCSO to share information, including photos and suspect details, with other retailers and loss prevention personnel. The Task Force drew officers from almost every division of the department- Patrol, Detectives, School Unit, Court Services and Reserve Unit. They started on Black Friday and usually worked through the day after Christmas and in some years until January 2.

The program was successful almost immediately in its first year. Just 6 days after the Task Force started work they arrested 37 people on a variety of charges including theft, shoplifting, traffic violations and outstanding warrants, plus recovered over $3,000 in stolen merchandise that was returned to the stores. At the end of the four week run, 15 officers had made 171 arrests and recovered $19,000 in stolen property.


Captain Edlund built on the success of the first year adding more officers and extra hours and days to the schedule. It certainly paid off as illegal activities were reduced and the major shopping season of the year was safer for everyone.

The statistics help tell the story: In 2012, 17 officers made 328 arrests over a 6-week period and recovered $65,000 in stolen property. In 2013, 20 officers made 342 arrests during 7 weeks and recovered $56,000 in stolen property. 2014 was the busiest year yet as 23 officers joined the Task Force and made 372 arrests in 5 weeks, recovering over $65,000 in stolen merchandise and 2 stolen vehicles. The majority of the arrests were for shoplifting, 35 were felony theft charges, 12 arrests for DUI and two fugitives from justice were nabbed.

Retailers have been thrilled with the results of the cooperative effort. In 2012, Travis Street, Market Asset Protection Manager for Wal-Mart, thanked Captain Edlund and his team for support during the busiest time of the year. That same year brought kudos from Alana Theis from Kohl's who said, "I am over several markets in the state of TN and I cannot thank the Mayor, the DA's Office and the Sheriff's Office enough on the support you give on impacting retail theft. I have been in the LP field for 27 years and although I have had support in some areas before, this is the best, most beneficial I have seen in my career. We have had lower shortages in all 3 of my stores in the market and I feel your support is helping to impact it." And from Knoxville Police Department Chief David Rauch, "Sheriff, I think the work that your guys do during the holidays on the loss prevention initiative would be a perfect contender for the Law Enforcement Partnership Award from the National Retail Federation. I know that we see an amazing decrease in theft during that time as a result of your efforts."

The public applauded the efforts as they learned about the program and arrests through the media and social media. Media Releases on the Task Force and their efforts were posted on the KCSO website and Facebook page. All three television stations and the major newspaper in the market sent reporters to ride along with an officer and report on how the Task Force was making holiday shopping safer. How many officers were on the Task Force and times that they worked were not released because of obvious safety and security concerns. All media outlets followed up with reports on the outcome and the success of the program at the close of the holiday season. All reports were overwhelmingly positive and shed light on the problem of theft and shoplifting during holiday shopping.

Sheriff Jones summed it up well when he told reporters, "Dirt bags, beware! We will not tolerate theft from our merchants, nor jeopardize the safety of our holiday shoppers."

In January 2015, KCSO partnered with Kroger ORC and the Knox County District Attorney's Office and opened an investigation into the resale of shoplifted baby formula. After six months of investigative work that included surveillance and controlled sales, indictments and search warrants were executed resulting in the seizure of over 4000 cans of formula and the arrest of five business operators and several known boosters. These cases are still being investigated as the evidence trail reaches into several states and now includes other agencies on the state and federal level.

In August 2015, Sheriff Jones initiated a full-time Retail Theft Unit to specifically address these cases. Three officers under the command of Captain Edlund are just beginning their work in combating the ever-growing problem of retail theft in this market. Through their investigative work and the building of relationships with area retailers, they hope to make an impact and be pro-active year round and still increase their efforts during the
​holiday season.