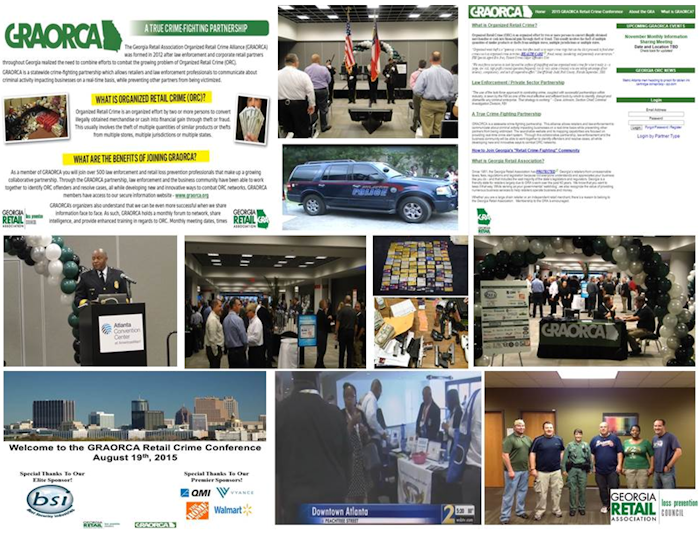 The Home Depot and GRAORCA Chair

The Georgia Retail Association Loss Prevention Council (GRALPC) was formed in 2010 after the successful passage of the Georgia Smash and Grab act. This legislation was developed, lobbied, and enacted into law as a direct result of the GRA formed coalition of Retail Loss Prevention, Corporate and Regional leaders. The GRALPC's mission was to provide guidance to its membership and law enforcement partners in the areas of education, professional networking, legislative initiatives and community outreach. As part of the GRALPC's roadmap for success, establishing and maintaining an Organized Retail Crime Alliance was something the members felt was a necessary and an important step in bringing together law enforcement and retailers to help with the ever increasing challenge of Organized Retail Crime.

In 2012, the Georgia Retail Association Organized Retail Crime Alliance (GRAORCA) became a reality. Since its inception, GRAORCA membership has continued to grow and currently includes over 600 law enforcement and retail loss prevention professionals from major retailers, specialty chains, and law enforcement jurisdictions in the state of Georgia and the surrounding Region. The platform for the alliance is graorca.org, a secure website which allows approved GRAORCA members to share intelligence relating to the businesses and communities we serve. Information includes, but is not limited to, organized theft crimes, robberies, counterfeiting, check and credit fraud, prescription fraud, identify theft and other activities perpetrated by organized crime groups. The GRAORCA website not only enables members to communicate about ORC, but also saves the information in a written and mapped format, searchable by crime and suspect type. This gives all members the ability to search the website, connect cases and establish patterns and trends. In addition members may upload photographs and crime bulletins to share with the GRAORCA community. GRAORCA also holds a monthly forum to network and share intelligence, and provide enhanced training in regards to ORC.

As a result of the intelligence sharing and monthly forums, there have been multiple success stories. The majority of our successes have started with simple information sharing between retailers and resulted in multi- jurisdiction arrests and elimination of ORC groups.

Here are two recent success stories since GRAORCA was formed in 2012:

?  A multi-retailer case was identified and developed with Atlanta PD and the Fulton County DA, which resulted in a local drug dealer arrest who was also acting as a fence buying OTC and laundry detergent from boosters and reselling to local bodegas. Arrests were made, cash drugs and guns seized and the realized retail impact was over $300,000.
?  Another multi- retailer case involved a traveling ORC group that affected multiple states. An ORC crew was breaking into locked showcases and taking electronics and designer goods to resell at flea markets across the Southeast and online. Three major ORC players were arrested and charged under the RICO statute in metro Atlanta, the retail impact was over $400,000.

The GRALPC and GRAORCA also look to make additional impacts in the state of Georgia. Recently GRAORCA held its 5th Annual Retail Crime Conference at AmericasMart in downtown Atlanta. The annual conference brings together 400-500 Law Enforcement and Retail Security professionals for a full day of networking and training, in an effort to combat Organized Retail Crime groups that negatively impact the security and safety of the communities that we do business in. As part of the conference and mission statement of the GRALPC and GRAORCA, over $30,000 has been donated to nonprofit organizations such as the Police Athletic League of Atlanta and Care for Cops. The GRALPC and GRAORCA have also recently partnered with the Criminal Justice Department of Kennesaw State University to provide scholarships to students interested in a career in Retail Loss Prevention. GRAORCA also holds various ORC trainings for law enforcement jurisdictions and leads GRAORCA "Road Shows", most recently in Savannah where retailers and law enforcement partners held a meeting to discuss ORC impacts and partnerships outside Metro Atlanta.

As GRAORCA continues to grow, we are focused on continuing to develop partnerships between Law Enforcement and Retailers in fighting ORC in the State of Georgia and beyond. GRAORCA also has plans for additional roadshows in 2016, as well as holding a law enforcement only conference in early 2016. Plans are also being set for the 6th annual Retail Crime Conference to be held in August of 2016.