Under Anderson’s leadership and with the cooperation of several ORC organizations, TCORCA is now edging closer to a comprehensive vision for a national ORC platform that he says will be nothing short of a game-changer.

While Anderson has amassed an impressive career, he says he is just one of many individuals in the industry going great things.

“There are many, many leaders in ORC that are doing amazing and awesome work, both from the public and private sector,” he said. “I get to be in their presence every day, and they don't get the recognition they deserve.” 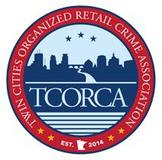 Anderson is also the current Executive Director for the Twin Cities Organized Retail Crime Association (TCORCA), which he says is a national model for public and private sector crime-fighting partnerships due to its organizational structure, mission, and vision.

Recently, TCORCA launched “Operation Blitz” in which more than 30 law enforcement agencies are teaming up with businesses to make the holiday shopping season safer. When the operation concludes, TCORCA will publish statistics/results of the detail, any cases of public importance, and recognize all agencies and businesses that took part. You can read more about that effort here.

Throughout Sergeant Charles Anderson’s outstanding career, he has never lost sight of why he’s chosen to be in this field: Because he has a passion for it and wants “to put the bad guy in jail.”

For the Iraq War combat veteran, it’s not about taking credit or making money – it’s about working as a team to explore and implement ways to protect people and combat ORC.

Sgt. Anderson has been with the Saint Paul Police Department (SPPD) for ten years. He was named Police Officer of the Year in 2009, promoted to Sergeant in 2011, and in 2013 established the only dedicated Organized Retail Crime Unit in the State of Minnesota. He is currently assigned to SPPD’s Fraud Unit, and serves on state and federal anti-organized crime collaborative task forces.

In 2015, he was awarded the Law Enforcement Retail Partnership of the Year Award by the National Retail Federation for his role in working with retail partners in investigating the largest cell-phone based international conspiracy and money-laundering scheme ever prosecuted by the Department of Justice.

A combat veteran, police sergeant and industry innovator, Anderson is a leader who has spent his career finding solutions to problems and doggedly pursuing excellence. He will continue to be a valuable asset to the ORC effort for many years to come.

For more on on the Twin Cities Organized Retail Crime Association visit www.TCORCA.org.