Ed Fuentes’ background in both Loss Prevention and Law Enforcement is extensive and spans the globe.

His LP career began at Target, where he worked as a multi-district AP Manager in the Bay Area within the Mervyn’s division. After the division was sold by Target, he was transferred to Dallas, where he successfully assisted in closing down the Texas, Oklahoma, and Louisiana Mervyn’s stores.

In 2006, Ed started with Protiviti Risk Consulting firm as a Project Manager, where he was assigned to conduct investigations and physical security assessments for several Fortune 500 companies within the firm’s client portfolio. He successfully completed investigations and physical security assessments in North, Central and South America, as well as Scotland and England.

He was recruited by Toys R Us in 2009 and joined the company as a Regional Asset Protection Manager. Three years later, he was promoted to the National Manager of Investigations with the responsibility of leading the Organized Retail Crime Investigations.

His global experience has allowed him to become a leader in the industry, focusing the efforts of his team on reducing shrink in over 900 brick and mortar locations, pop-up stores, and e-commerce. He believes the key to leading a successful team starts with hiring the right leaders and ensuring they have the training, support and experience to be successful

"I use retail partners as well as law enforcement colleagues to assure I am merging my leadership between both areas," Fuentes said.

He credits these individuals with helping him ensure he is challenging himself and improving as a leader, which he has continued to do throughout his impressive career.

Through hard work, a diverse set of experiences, and strong leadership skills, Ed Fuentes is a stand-out leader in the LP field who continues to improve the industry.​ 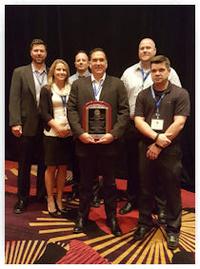 Just last month, the outstanding work of his Toys R Us Investigations Team (pictured to the right) was recognized at CLEAR’s Annual Conference, where the team won the award for Investigation of the Year. In 2012, The TRU Investigation team was also featured in Time Magazine for playing a key role in a $2 million ORC case involving the theft of Lego’s. Since that time, a number of other high value ORC investigations have been closed throughout the country. Ed also served on the Loss Prevention Research Council’s ORC Committee.

His experience isn’t just limited to roles in the LP industry.

He has received formal training at the Department of Justice in Sacramento, California and advanced officer training from numerous law enforcement agencies throughout the State of California. Unfortunately, after being involved in a major vehicle collision on duty, he was forced to retire from the field.