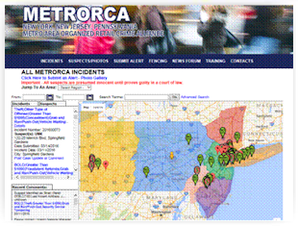 "There was a real need for the people that work very diligently in our world of ORC Investigations (retail and LE), to connect as one group," he said. "My passion is being able to bring these professionals together to connect as one force to combat ORC."

He hopes MetrORCA can continue to grow and become "the go to outlet for training, awareness, collaboration, networking, education and legislative efforts," for ORC in the Northeast.

Flynn began his LP career at TJ Maxx in the Boston area while attending Northeastern University and is currently working on his MBA.

Tim's had the unique pleasure to work with and for some of the industry's very successful leaders. As his first supervisor was Richard Peck, who's now the Senior Vice President at The TJX Companies. Where he gained some great experience working with their National Task Force which was focused on ORC.

Timothy Flynn's career has been predominately focused on investigating and resolving ORC throughout New England and the New York City Area, New Jersey and, most recently, the Mid-Atlantic.

Flynn is currently the president of MetrORCA, one of the largest ORC alliances in the country. The group started in 2014/2015 and covers NY, NJ and PA.

"Going back to 2012 as different ORCA groups popped up around the U.S., there was a real opportunity to create the same platform in NYC Area," Flynn said. "We were very fortunate to have Lt. Tarik Sheppard step up in 2014 to announce that Commissioner Bratton and the NYPD would be supporting the creation of an ORCA group."

Since the group's creation, Flynn was has very close to the organization. He believes his passion for ORC has drawn great people to connect him him and ultimately serve on the group's board.

"I was selected by my peers who share the same passion and it is an honor to serve as president of the organization," he said.

MetrORCA currently has over 1,800 members, 800 of those from the Law Enforcement community, and they are determined to keep every member up to date with ORC incident alerts. In the first year, the NYC Metro group put out 400 incident alerts; in 2015 it was over 1000. Year to date, MetrORCA has issued over 800 incident alerts.

Tim then joined the Gap and soon became the ORC Manager for New England under Nelson Harrah. Where he later moved to New York to help start the ORC program for the Gap. He then accepted an opportunity with JCPenney to work as one of their first Market Investigators (for Mark Vanbeest and Stan Welch). Flynn was then promoted to his current position, Market Investigations Sr. Manager, where he is responsible for a team of investigators that supports the Northeastern United States.

Flynn concluded by saying, "I owe a lot of to a lot of different people throughout my career, too many to list. With their help and guidance I've been able to grow and ultimately help develop the ORC program here in the New York area. As one of the most important things I've learned is that it's always about working as a team and helping each other grow that makes an executive and an effort successful. And that's what the MetrORCA is all about. Helping each other and each organization fight the ORC epidemic.