An Interview with Scott Sanford, Director of Investigations & Training at Barnes & Noble, Inc.
- By Amber Bradley

Scott Sanford is the director of investigations and training at Barnes & Noble, Inc. He has more than 20 years of experience in the retail loss prevention industry where he developed a foundation in retail operations and shrink reduction strategies. After his service in the United States Marine Corps straight out of high school, he gained work experience at Dunham’s Sporting Goods and Lowes Companies, Inc. Today Sanford heads an investigations team at Barnes & Noble that seeks to identify and reduce loss through systemic measures and operational proficiency. Sanford contributes his career success to his solid work ethic, an incredible list of mentors and unwavering determination.

If you don’t like it, leave it
Sanford would describe himself as a good kid growing up, with good grades and a passion for the sport of wrestling. Sanford’s father had many words of wisdom, but Sanford remembers his best advice, “You’re smart and you have a great work ethic. Find a job you like. If you don’t like it, leave it and move on to the next one. If you like going to work, it will show and you’ll get promoted often.” His advice was spot on. Sanford found the industry he loved, loss prevention. 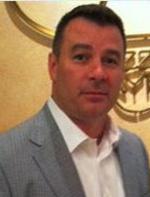 Finding your passion in life
In college, Yoplait Yogurt whose plant was close to Sanford’s college, offered him a job to make nearly $10/hr. He also had the chance to make $3.35/hr. (minimum wage at the time) catching shoplifters. Sanford took the obvious choice, catch the bad guys! He began working for “Stop That Thief (S.T.T, Inc.).” As a criminal justice major, catching shoplifters seemed more appealing. STT provided retail investigative services to a variety of Michigan retailers. He remembers the indoctrination period required: 80-hrs of walking the floor, learning how to blend in, observing actions of customers, and maintaining surveillance without getting pegged. His first solo apprehension was the daughter of the Chief of Police! She had stolen Band-Aids by concealing them in her purse; she took nothing else, just a $1.98 box of Band-Aids. During his first year working for STT, he caught nearly 100 shoplifters. Sanford found his niche.

Top-shelf ORC investigative process
In April 2005, Sanford started with Barnes & Nobles as a Regional LP Manager and was promoted to Director of Investigations a year later. At the time it was evident that Barnes & Noble’s shrink was externally driven; Sanford was also aware that thousands of online sellers were boldly listing the very goods that were walking off the shelves. But at that time it was not popular to investigate external loss beyond store events. Sanford wanted to change that. The foundation of the investigative model started with chasing down the low hanging fruit, the online sellers who listed and sold stolen product in quantity and below MSRP. The strategy Sanford implemented included identifying suspicious online sellers, placing bids to obtain seller information, making orchestrated buys to confirm seller identity and further evaluate the product. No longer anonymous, the sellers would be further investigated, located and interviewed by Sanford, and later by his growing team of investigators. In every case, they found that prolific online sellers were often prolific shoplifters, many of which were niche’ shoplifters stealing only Graphic Novel or Computer books, while others focused on Audio. They pulled written and video-taped confessions from people who had flown under the radar for years due to their anonymity. His team discovered that taking just one person out of the market resulted in a drastic reduction to inventory shrink. Today they continue to refine their process. “The culture has changed over the years”, Sanford explained. “With increased emphasis on training down to bookseller level, we’ve seen a shift in how cases are initiated, with over 60% now being identified by store personnel encouraged to obtain ‘actionable data’ on suspects; vehicle plate numbers, and other identifiable means.” Sanford is very proud to be part of Barnes & Noble’s amazing team and rightfully so.

Sanford grade investigations team
The loss prevention department at Barnes & Noble, led by Jeff Fulmer, Vice President of Loss Prevention is quite lean, running at only a fraction of the industry standard. Sanford’s team is no exception; three investigators address the ORC efforts consisting of over 600 stores throughout the country. The investigator’s role is to support the field and reduce inventory shrink through proactive investigations that identify threats to the company. Sanford said they are first and foremost investigators. His team is well rounded, individually and collectively. The standards they’ve set as a department are high in regard to technical understanding of the role and its requirements. A case may start with an ounce of information, but then develops quickly into a massive portfolio of details associated with a once unknown suspect who now has an identity, a personality, and a place he or she calls home. The investigative piece is key, it is the foundation of what comes next: the interview and the confession. Being able to conduct a knock and talk interview is an art. A successful interview requires confidence, charisma, and skill. The wrap-up is very important. Sanford has seen great cases turn to mud because they were not properly closed. Sanford’s mentor, Peter Barrington, told him, “Scotty, nothing compliments a great case better than a great statement and a world-class report.” His team is well aware of this mindset, and they’ve received numerous compliments from various law enforcement agencies over the years. Sanford shares that his team has an impressive prosecution rate, too.

$30 Billion price tag for ORC
The National Retail Federation says Organized Retail Crime (ORC) costs the retail sector nearly $30 billion each year! Sanford explained the estimates of ORC theft vary by retail sector/chain, stating “It is very hard to obtain exact loss figures attributed to ORC by an individual retailer, let alone an entire industry”. At Barnes & Noble, Sanford attributes up to 60% of the total company inventory shrink to external theft. However, it is a small percentage of shoplifters that drive the total shrink dollars. Sanford believes 20% of shoplifters are driving 80% of the problem. He estimates nearly half of their total loss can be attributed to ORC activity. To put things in perspective, however, Sanford clarified total shrink losses are well below industry average. And, though this is largely due to ORC investigative efforts, Sanford praised the collective efforts of all department personnel. “A ball doesn’t bounce unless its round, and we have a well-rounded team. Our Regional LP Directors have done an amazing job in the field; store awareness is very high. The communication of shoplifting incidents that surface in the stores is crucial to our efforts. The best-in-class inventory performance, and year-over-year shrink reduction has been a team effort. Backed by such an exceptional team, Sanford is confident the ORC price tag will continue to decrease.

External theft or internal theft: Who is bigger?
The recent NRSS/Hollinger report says that external theft is bigger than internal theft. Sanford believes the NRSS is correct in reporting that external theft outweighs internal dishonesty. The driving force behind the explosive growth of ORC though is two-fold: 1) Shoplifting is categorized as non-violent crime and therefore has not warranted stiff penalties which serves as a catalyst for the first-time or second-time shoplifter. Sanford thinks if the system were not so soft on first-time offenders, we’d see less repeat offenders. 2) There are too many ways to liquidate product quickly, and with relative anonymity. This is due to the increase of online sales venues, the technology explosion, and the move toward a more relaxed mindset on non-violent crime, particularly when the victim is a retailer. On top of this, the desire for instant gratification is so prevalent today which often leads to additional incentive for criminal activity.

The biggest challenges to fighting ORC
Sanford identifies one of the biggest challenges to fighting ORC today is the political environment surrounding early release of prisoners and the growing trend that says shoplifting does not warrant stiff penalties. Awareness of the ORC problem is not the issue. The word is out: ORC is bad. Retailers get it. But as more and more bad guys realize financial gain without threat of incarceration, Sanford says we will see theft spike. He further explained, “We’re noticing increases in theft in California with “Proposition 47,” which reduces the penalties and classification of many non-violent crimes (to include shoplifting). Couple this with rising felony thresholds and other states falling in step behind California, and ORC will continue to be a national crisis.”

Additionally, the emergence of ORC associations has been steady over the past five or six years thanks to LP and Law Enforcement professionals who have devoted their time to these efforts. Sanford is not convinced there is a need for a National ORCA, although he does advocate a national website for all ORCAs. He thinks retailers should step up and fund a national website. It could be managed by an unbiased source which would ensure that individual ORCAs do not lose their personality, only their URL.

If Sanford could have one wish to solve one problem overnight regarding ORC, he would love to see consistent standards established for all online sales venues, similar to those trail blazed by Ebay under the efforts of Paul Jones and his team. We are beset by shoplifters who re-sell stolen goods on a variety of sites, tax-free and anonymous. An online retail giant such as Amazon, for example, could work with retailers (not just law enforcement) to help stop the spread of fraud. The sale of misappropriated and counterfeit goods is an illegal epidemic with losers on several fronts. Retailers need to establish programs aimed at attacking ORC head on.

The trifecta of retail loss
A 2014 National Retail Federation study reported that eight of ten retailers said they had been victims of organized retail theft in the past year. Sanford sees the deluge of stolen products back into the market as a growing challenge for retail. He clarified, “A stolen item is a triple whammy for retailers: 1) they lose inventory, 2) they may not realize they’ve lost the product and lack of replenishment results in decreased future sales and 3) they lose customers because people are now buying the item from another source.”

The modern criminal profile in retail theft
Sanford believes there is no one stereotype of the modern criminal. In his team’s investigations, they’ve interviewed school teachers, attorneys, military personnel, housewives, loss prevention personnel and others, many with advanced degrees. “We’ve also interview our share of addicts which is still the largest group we encounter,” Sanford highlights. But overall, the modern criminal comes from all walks of life. Sanford believes the best plan of attack is to start with awareness from the top down within the retail organization. Sanford thinks awareness starts at the top, and trickles down. Employing great LP people who can identify where problems exist and who have the know-how to resolve the issues is a good start.

The importance of the retail investigator
Complexities can arise if a case spans more than one law enforcement jurisdiction. Sanford has seen on several occasions that some local law enforcement agencies are hesitant to accept cases that expand beyond their jurisdiction lines. Resources, such as time and obtaining necessary evidence in a multi-jurisdictional case, can be a deterrent for accepting a case. This is why the retail investigator must do his/her part up front and not dump a weak or incomplete case in the lap of a police detective.

Sanford’s pride and joy
In closing, Sanford humbly shared what he is most proud of, “I’m proud of many things from a career standpoint, primarily the investigation program we’ve developed at Barnes & Noble which I believe is truly unique and top-shelf. However, what I’m most proud of is my daughter Kara. She is an amazing young lady; she is smart, athletic, and most importantly, centered. She recently accepted a full scholarship to Providence College.”