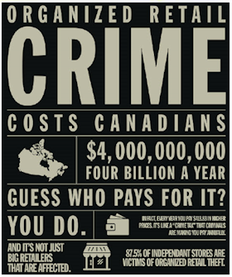 ​The Story Behind ORC Efforts in Canada

S-4 and PIPEDA (Personal Information Protection and Electronic Documents Act), the restriction pertaining to Retail Loss Prevention prevented the sharing of any information on a suspect without Law Enforcement being directly involved in an investigation.

Even though Canada has passed Bill S-4, many of the retailers are still reluctant to share information because the fines for violating a citizen’s rights range from $10,000 to $250,000, and the potential lawsuits and bad press have most retailers holding back.

This year The DAILY reported on Calgary’s largest recovery of stolen merchandise; $1.5 Million of stolen items were seized.

In April of 2016, we covered an elderly couple in Vancouver that paid shoplifters in drugs to steal; $200,000 of merchandise was recovered.

Back in 2015, York Regional Police, along with a number of Retail Loss Prevention professionals, were involved in a $1 Million case called ‘Project Resale’; 4 people were arrested.

Also in 2015, York Regional Police, working with Police from British Columbia and Quebec, arrested 16 people involved in a theft ring, recovering $88,000 in merchandise in ‘Project CALI.1’.

Just a few examples that show how Law Enforcement and Retailers are working together even with their emphasis on privacy.

During our research and coverage on Organized Retail Crime Groups here in the U.S., we’ve established nearly 50 groups with thousands of Loss Prevention, Banking, and Law Enforcement Professionals involved in combating ORC. Our next question was, what’s Canada doing?

ORC Associations in Canada – A Work in Progress

During this research, it was sad to note that most have few options on where Retailers and Law Enforcement can get together to share information. In the past, many ORC groups have started but fizzled out, either because of the privacy laws or budgets.

Calgary Police and a number of Retailers have created ‘RetailCOP’, the only online Retail Crime Prevention community administered by Law Enforcement in Canada.

On Sept 7, 2016 the Leithbridge Regional Police, in Alberta implemented a similar program.

Currently in Toronto, a small group of retail Loss Prevention professionals meet, with no real schedule and not even a name for the organization. But they are meeting and making a difference.

The RCC Loss Prevention conference (September 29th) is a great opportunity for Retail Loss Prevention executives and Law Enforcement agencies to come together and re-energize the ORC efforts across Canada.

With privacy laws having played such an impactful role throughout Canada’s history and with retailers being as risk adverse as they are, given the social media consequences and the consumer lawsuit mentality, establishing a strong ORC Association model based on information sharing may be quite the difficult task.

In this respect, Canada is much different than the U.S., because in Canada the rights of the individual supersede the rights of corporations - a fact that, quite frankly, the Canadians are very proud of.

Given that Canada is one tenth the size of the United States and couple that with the current economic retail environment, and what you have is a very tight Loss Prevention job market that, quite frankly, doesn’t have the resources to dedicate positions to fight ORC and therefore build the ORC Associations we see here in the states.

The first thing we needed to keep in mind was that $5,000 is the felony threshold for shoplifting in Canada, nationwide.

All shoplifting below $5,000 is treated as a misdemeanor. There’s no three-strike law, no difference if it’s your first offense or 30th. Convicted offenders can be fined and can be sentenced to up to two years in prison.

Understanding the difference between ORC in the U.S. and Canada begins with the sharing of information. The building block of ORC here in the U.S. is the ability to share information.

In Canada, the protection of Personal Information Privacy had long been a restriction on Retailers until June of 2015 when Bill S-4 was passed. Without getting into the pages of information on Bill