Last year, the D&D Daily gave you, for the first time ever, a four year study of publicly reported ORC Cases. We analyzed the numbers of every single ORC case that was reported on since 2012, and provided you with the number of cases, dollar amount reported from each year, and the top trends driving organized retail crime.

Now, we are going to give you a look at this first quarter in terms of how organized retail crime is projected to develop for the rest of 2016. Here is the Daily's breakdown of this year's Quarter 1, compared to first quarters over the past four years. So far, it looks close in numbers to last year's first quarter. Could this year beat out last year? We will have to wait and see.

The top 5 cases by dollar amount that the Daily has reported thus far are:

Workers steal over $500,000 of Lobster Meat from Distribution Center

The map to the left represents the number of cases per state that the Daily has reported from January 1st through March 31st. The five states with the highest number of cases are California (36), New York (31), Pennsylvania (29), Florida (28) and Texas (26). 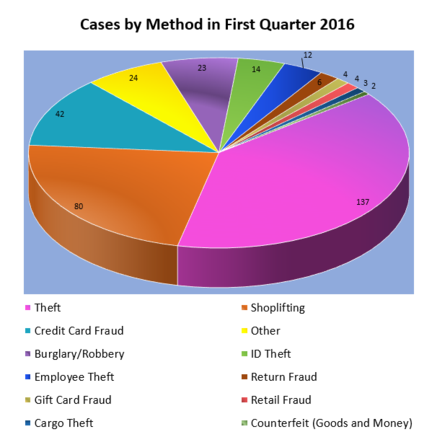 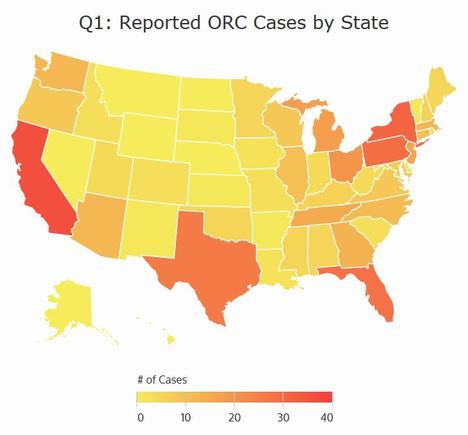 The D&D Daily's Q1 ORC Report
A data driven, detailed audit of all publicly reported ORC crimes in the U.S. 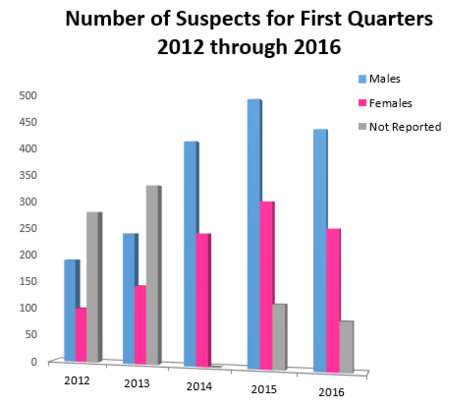 The graph to the right represents the number of different methods used in ORC cases reported in the D&D Daily. Theft, Shoplifting and Credit Card Fraud are by far the main culprits, making up 259 cases or 70% of the total 368 cases.

Of our 762 total suspects, 423 reported were male, and 250 reported were female. Below is also a breakdown of the number of suspects reported the past four years, with number of male and female suspects, as well as those with a gender not reported.