Three of these states - Pennsylvania, Florida and California - made the top five list in the second quarter as well, while Illinois and Texas are new additions in the third quarter.

Ultimately, it's clear that ORC, whether it's the number of cases or suspects, continues to be on the rise in the United States. 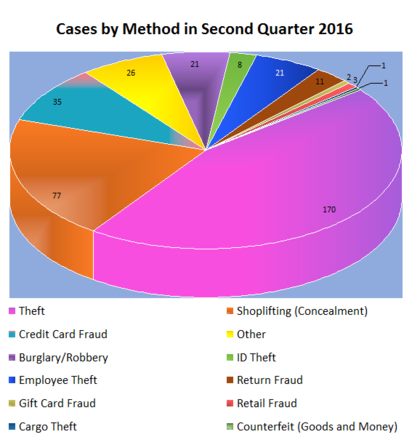 Of the 904 total suspects reported in the second quarter of 2016, 441 were male and 251 were female; 212 suspects had no reported gender. The graph to the left is a gender breakdown of second-quarter suspects reported in the D&D Daily since 2012. While there has been a slight dip in reported male suspects from Q2 2015 to 2016, increases in female and unidentified suspects more than make up the difference.

Regardless of all other variables as it relates to the dollar amount reported, one fact remains: the number of cases that are reported and the number of suspects continues to rise quarter by quarter. 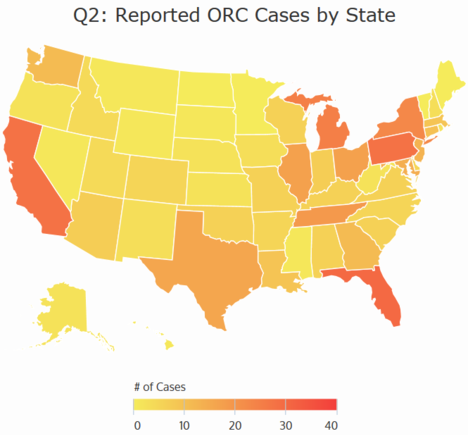 Of the reported cases, the most popular methods used were theft (45% with 170 incidents), shoplifting (20% with 77 incidents) and credit card fraud (9% with 35 incidents). These three methods alone combined for a total of 282 ORC cases in the second quarter - nearly three-quarters of all reported cases.

The pie graph shows these and other various methods used in ORC cases reported by the D&D Daily in the second quarter of 2016. 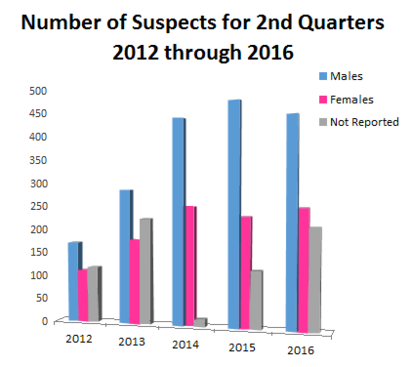 In the first quarter of 2016, the D&D Daily released exclusive reports about ORC trends in the United States and in which direction these crimes were headed for the remainder of the year. The number of cases in 2016 appears to be on track to beat last year's figures, with ORC cases in the first half of this year surpassing those reported during the same period in 2015.

The top five cases by dollar amount reported by the Daily in the second quarter were: