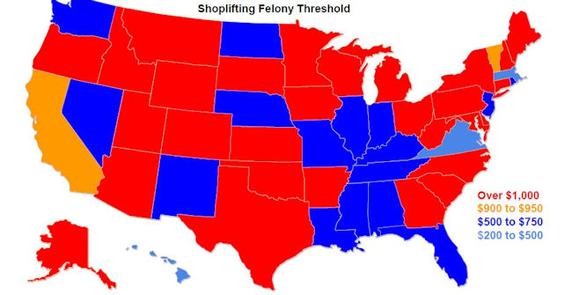 ​​Shoplifting Felony Thresholds For All 50 States

While California's Proposition 47 has been getting a lot of attention in the headlines lately, with its increase in the state's felony threshold limit to $950 being blamed for a spike in shoplifting, it is far from the only state moving in that direction, as we've reported in the Daily over the past year.

Recently, the Massachusetts State Senate approved a bill to increase the felony threshold on shoplifting from $250 to $1,500. The bill is currently in the House and is expected to be signed into law by the governor.

The state of Virginia is currently looking at raising the threshold from $200 to $1,500.

Hawaii stands alone with Gov. David Ige saying he would veto a recent Retail Theft Bill attempting to increase the felony threshold from $300 to $750. The Hawaii Retail Council played a key role in blocking that legislation.

Currently, 29 states have a felony threshold for Shoplifting/Larceny of over $1,000, with the highest being Wisconsin set at $2,500. Supporters of their increase say that the law was set at $100 in 1906. In today's dollars that translates to about $2,400.

Supporters also state that the increase will lessen prison overcrowding, reduce the burden on the court system and save time for police tied up with petty shoplifting calls.

Opponents of the increase say it hurts retailers big and small, increases the cost of goods and reduces margins and profits. ​

Some say good people make mistakes. Should a shoplifting charge make it harder for a person to get a job, to vote, to serve on a jury, to own a firearm after being branded a felon?

Wherever you stand on the issue, it's important that Loss Prevention professionals be aware of the current laws and legislation affecting our industry and the ability to enforce our duties.

We at the D&D Daily will continue to monitor these legislative changes in our effort to keep the industry informed and up-to-date on all the latest news, information and trends impacting retail loss prevention.