In 2013, he was chosen to run the Grand Larceny Analytical Unit, which sought to identify pattern crimes and pattern crime offenders by using precision policing and focusing on the few people that commit most of the crimes in New York City. It was during this experience that Tarik recognized how widespread Organized Retail Crime is.

"My unit discovered a crew that was stealing ink cartridges throughout NYC and realized it extended up and down the east coast," he said.

During a meeting with Sean Huggins (CVS) and Stefanie Mangiante (CVS), he was introduced to the concept of Organized Retail Crime Alliances and knew such an organization would be beneficial to New York.

With the support of Deputy Commissioner Dermot Shea and then-Commissioner William Bratton, Tarik began putting together one of these collaborative efforts. Using cases published in the D&D Daily, he was able to identify retailers in New York that were hosting meetings discussing retail crime in the area.

"For years, many retailers had tried to establish this and were unsuccessful," Tarik said. "We were able to do it in 6 months."

Not long after, he led an expansion into Pennsylvania and New Jersey, which is why the group is now called MetrORCA and Tarik currently serves as an advisor. As we recently reported, the organization has more than 1,800 members, including 800 members of the law enforcement community. So far, Tarik says they have had "tremendous success using information from retailers to build cases against gang members."

All the while, Tarik was promoted to Lieutenant in April of 2015 and became the Special Operations Lieutenant in the 32nd precinct in Harlem. Currently, he is assigned to the Deputy Commissioner of Public Information Office.

In his free time, Tarik likes to spend time with his wife of 9 years, Jasmine, and his two kids, Danielle and Tyler.

The D&D Daily thanks Tarik for his leadership in the ORC effort and his many years of public service.

Whether it was teaching in classrooms or working his crime beat on the city streets, Tarik Sheppard has spent his career serving the public. While he is currently a Lieutenant with the New York Police Department, he previously taught middle- and high-school math in the New York City public school system.

Aside from an 11-month stint with the Fort Lauderdale Police Department, Tarik has spent most of his time with the NYPD, where he started his law enforcement career and continues to serve today. LOAfter he was promoted to Sergeant in 2010 and transferred to the Transit District 11 in the Bronx, Tarik spent three years working as an Anti-Crime Sergeant.

"I worked in regular decoy clothes catching pick pockets, phone snatchers, robbers and other violent felons," he told the Daily. 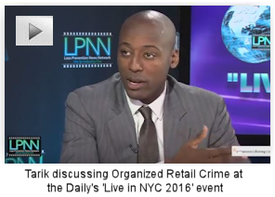 "Very quickly, I had 10 core companies that were excited about the project I was starting," Tarik said.

In spring of 2014, Tarik brought the core group – Walmart, CVS, JC Penney, Rite Aid, Target, Sephora, Macy’s, DSW, Burlington Coat Factory, and Home Depot – together for a meeting with law enforcement and other retailers to announce the partnership and the goal of creating a New York Metro ORCA.

Through their relentless efforts hitting the pavement and working the phones, they were able to officially roll out the organization in September 2014. In front of 500 retailers and law enforcement personnel, then-Commissioner Bratton and Tarik announced the creation of NYMORCA.

ORC Leader Tarik Sheppard
From the Schools to the Streets, One of NYC’s Finest Public Servants